His wife, Mrs. Mohammad walked obediently behind him…10 paces behind with her eyes to the ground.

This is our fence…prior to the story

Let me just start by saying, I really don’t care who you pray to. But here’s the stuff on my obnoxious neighbor, Mohammad Vas(and then I’ll spell the rest of his name later after I take a big sIGH.

Back in 2007, we purchased our home…with an 8 foot high professionally installed fence in the back yard. Based on the posts that we cast in concrete, it had been there in some shape or form since 1995 when the house was first built. In May, the night before we were to leave for Daufuskie, I hear noise coming from behind the fence. It’s a strange noise, like someone was walking back there. Now, there is an abandoned home that is totally overgrown with weeds and the 3.5 acres of land are overgrown as well. There is also a tennis court, which has trees growing out of the cracks and no net. Frankly, it’s a mess. And, an eyesore. My research had told me that the house was purchased by Mohammad Va(deep sigh) in 1998 for $700,000. I got up from my new patio furniture and carried myself and my glass of red wine over to the back yard to see what was going on. There he was…big bug eyes, a small olive skinned man, about 5 foot 4, and his wife, walking obediently 10 paces behind (and I’m not joking…)

I introduced myself and reached out my hand to shake his. He did not reciprocate. Instead he said quite sternly, “Dis Fence is coming down!”

To which I replied, “Excuse me?”

Again, he stated in his accent, which based on linquistics and his demure obedient wife (with her eyes looking to the ground, still 10 paces behind) was of the Middle Eastern dialect, “Dis fence is gone! How long it beeeeen here?”

To which I replied, “I believe about 14 years.”

I again introduced myself, said it was SOOO nice to meet him, and the little man turned his back on me and stormed up his property into the weeds. His wife, Mrs. Mohammad walked obediently behind him…10 paces behind with her eyes to the ground. 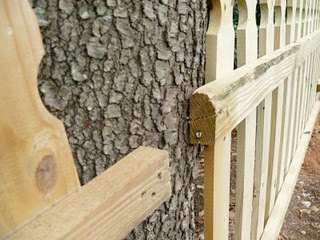 I went to get John and told him the situation that was going on in the back yard. He too went to the back and peeped over the fence and little Va(long sigh) was gone. We left for Daufuskie and our summer travels the next day.

Upon our return in August, we receive a certified letter from an attorney saying that we’d be sued unless we removed the fence which according to the survey was EIGHT INCHES on his property. That’s bigger than, well….I don’t need to say.

Back and forth we went with the attorney. We agreed to take down the fence, but wanted to know what he intended to put in it’s place. On Friday, the night before the fence came down Mr. Va(long Sigh’s) attorney, Creepy Calhoun, let us know that Mr. Vasign would put up another fence that looked like our fence, or landscaping, or whatever we wanted in it’s place. John immediately called him back and said, “we’d appreciate the landscaping, like Leyland Cypress or American Holly please.”

Saturday the fence came down.

Sunday little man showed up to review our work.

They screwed the sections into our tree!

Look at this shit. 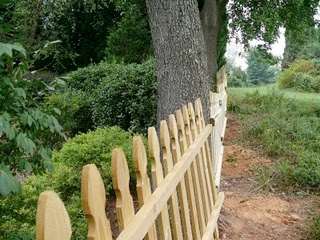 They didn’t even cleanup the posts!

Notice the craftsmanship. The detail.

The Suburban Martyr is PISSED. 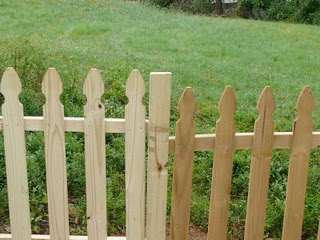